The year was 1920. It was the start of the decade, shortly after World War One, and a time of great prosperity for the country. Women were called dames, dolls, or the cat's meow. At the beginning of the decade, women still wore long skirts but the "Roaring 20s" brought a new look of short skirts and smartly coiffed shorter hair. Racial tensions were high and quotas set for immigrants coming into America. The Klan was very active during this period. The Harlem Renaissance was acknowledged as the first important movement of black artists and writers in the US.
On January 16, 1920, the Volstead Act became effective, heralding the start of Prohibition and on August 18th of the same year, Tennessee delivered the crucial 36th ratification necessary for the final adoption of the 19th Amendment, giving women the right to vote. The worst and longest economic recession to ever hit the United States would define the end of the decade-the Great Depression.It was within this environment that Zeta Phi Beta Sorority was founded. Zeta Phi Beta Sorority was founded on the simple belief that sorority elitism and socializing should not overshadow the real mission for progressive organizations - to address societal mores, ills, prejudices, poverty, and health concerns of the day. Founded January 16, 1920, this very day... Zeta began as an idea conceived by five coeds at Howard University in Washington D.C.: Arizona Cleaver, Myrtle Tyler, Viola Tyler, Fannie Pettie and Pearl Neal. (Excerpt taken from our international website)

Sorors let us not forget that simple belief was back then...sorority elitism and socializing should not overshadow the real mission for progressive organizations...to address societal mores, ills, prejudices, poverty, and health concerns of this day and age. Happy Founders Day...sorors let's get back to the basics.

Sitting under my new dryer while typing 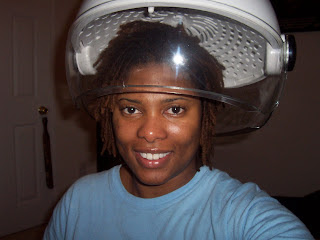 My hubby bought me this new hair dryer for Christmas. It isn't that Purple People Heater that I wanted but it works really well. It cuts my drying time in half, which is a plus for me. It is especially great when I have to wash my hair multiple times during the week due to my streneuous workout schedule (I am hitting the gym twice a day. Once on my lunch and right after work) and my hair is a sweating mess. So this dryer is my new best friend. Gotta love the hubby for paying attention when I talk. All I did was say...You know it would be great if I could sit at the computer while my hair is drying. He listened and went to Sallys and bought this dryer for me.

Yeah, yeah….I know we all make them only to break them but I wanted to put some things out in the atmosphere about some promises that I made to myself and the most high prior to entering into 2008. First and foremost I will not stress over mess. What I mean by that is this…I am an analytical person who thinks all the damn time. Too much thinking leads to stress. Before I do something I am planning it out in my mind. If something negative happens to me I am thinking of ways I could have made that negative a positive or I am thinking of ways to prevent that from happening again. I also allow for other family members to dump their problems and other's problems on me so I think of ways to solve those too. One way I allow that to happen is my daily phone conversations with my sister. She is always telling me about her problems her friend's problems (people I don’t even know), and other family member’s problems. I know you are sitting there like damn when is your mind at rest. It is rarely at rest! I am reading a Joyce Meyer book and it is teaching me how to rest my mind and to eliminate outside interference. So my first resolution is to rest my mind and meditate every night. I also plan to cut back on the amount of idle conversation that I participate in. Yeah that means the daily phone conversations with my sister will be cut back drastically.

For stress relief I joined the gym down the street from my job and I started lunchtime workouts. Lately my boss has been micro managing me and that stresses me because I am trying to figure out why this dude is on my back. I think he is bored, but who knows. This makes the third RED faced manager (literally they are as red as beets) I have had in my career. It is something about the RED face men that I work with. I can’t determine the causes of another person’s inadequacies so I am going to work it out for an hour a day to both help me drop the pounds and de-stress. I also hired a personal trainer for a month to help me jump start my program. I don’t usually do the personal trainers but this trainer at the gym gave me a free session today that whipped my butt in 30 minutes. I definitely feel the burn right now as I type this. He gave me a great rate too so for 4 weeks I will see what type of results I see with my trainer's help. Every now and then you need a little help to jump start the results.

I also plan to watch what comes out of my mouth. I know this will be hard for me. I sometimes clown around with my friends or my husband when we are out and about. You know how you see that sista or that brotha who know they are wrong for wearing something or doing something and you give that look. Well I give that look and I like to discuss. Well I am going to have to stop that...I am taking it back to the basics. If you don't have nothing good to say don't say nothing at all.